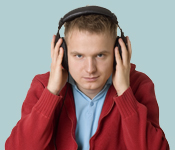 I would never use the term “music” to describe the complex audio simulations that I produce. Some of our more complex and detailed simulations I have worked on have taken YEARS to produce. However, I point you to a reprint of a great article by Kristi Eaton. She covers the skeptic view, and the believer view – in wonderful detail. Check it out…Nicholas, like many users, says he was initially skeptical of I-Doser, the latest Internet craze that claims users can achieve altered states simply by downloading and listening to music. The websites claim the I-Dosing music simulates the effects of drugs such as cocaine and peyote. His friend, who regularly uses the “cocaine” and other drugs doses on the website, told him about the beat called “Out of Body,” and wrote enthusiastically about its effects, declaring that he was now a regular user.

Razzinnator, another I-Doser user, says he tried the French Roast dose, advertised as the “perfect Early Morning pick-me-up, or a late night boost when you need a few more hours of open eyes.” For $2.50, a dose of French Roast will take you “from an existing state of blah to a normal mid-day condition of awake,” the site states.

“I was a bit droopy at the start, but then I felt something like a flow of energy all through my body, hot and cold at the same time. Once it was over, I felt more awake than I’ve ever been lately. Can’t wait to try more doses,” he writes.

I-Dosing uses two separate binaural beats, or two repeating and alternating tones of slightly different frequencies, a different tone playing in each ear, that can reportedly alter brain waves. Binaural beats, discovered in 1839 by physicist Heinrich Wilhelm Dove, have since been investigated by neurophysiologists in the course of research on hearing. Some studies suggest that binaural beats may be helpful in reducing anxiety, and research on the influence of binaural beats on mood, relaxation, focus and pain management is ongoing.

Some of the most powerful doses can be downloaded here.

There are numerous unverified claims about the effects of binaural beats, and the effect of I-Dosing is clearly one of the more prominent claims.

The trend is sweeping through high schools, and many users say they can get a high equal to that of hard drugs, a claim that has frightened many parents who call I-Dosing a gateway to real drugs, and has led some schools and law enforcement officials to warn parents of the sites.

Freelance writer Ron Doyle, in an article published on the Psychology Today website, suggests that I-Dosing is an outgrowth of teen culture’s ongoing fascination with altered states.

Still, others say the whole idea of music and sound altering your body to the point of hallucination and other altered states is simply not possible.

Simply type in I-Dosing into YouTube.com and you can see firsthand the experiences some people have had with I-Dosing. Or, read about their experiences on I-Doser.com, one of the most popular I-Dosing websites.

Nick Ashton, the creator of the I-Doser.com website, notes that binaural brainwave technology has been around for hundreds of years. I-Dosing builds on the phenomenon, he says.

“We had the idea that, because they can be used to emulate feelings, we could map those to create a simulated mood or experience,” he says.

Users can download the doses to their computer or straight to their iPod or iPhone. When buying, the audio file doses are divided into several categories, like recreational (Absinthe, acid, GHB, Heroine), hallucinogenic (LSD, ketamine) and prescription (Oxy and Demerol). The site even sells steroid doses, like JuiceIT!, described as designed for the sports of workout user.

Effective or not, I-Dosing is potentially lucrative.

Most of the doses run for under $5 and are five to 30 minutes long. The I-Doser application has been downloaded more than 1 million times from download.com, Ashton notes.

“With proper use, I-Doser is a safe effective and fun way to experience a simulated mood. It also offer many meditation benefits,” Ashton says.

And for those who swear by it, I-Doser has a dealer program, where the dealer makes a commission on each sale.

But does it really work?

According to the website’s users, yes.

I-Doser.com created a poll for users to voice their opinion on the doses.

Of the 868 people who voted, 244 people, or 28 percent, said “some doses work, some don’t.” Eighteen percent, of 156 people, said they felt the effects almost every time while 125 people were the most positive, saying “It BLOWS MY MIND!” Ten percent, or 91 people, said only a few doses have worked for them, while another 78 people say they have felt the effects of only one dose. Altogether, 80 percent of people have said they have felt some sort of effect at least once. The remaining 20 percent of people said it is a complete placebo — they never felt anything.

One user, going by the name Kurwik in the forums, wrote about trying the I-Dosing equivalent of peyote three times and experiencing no effect. If, after trying the I-Dosing version of ecstasy, he still didn’t feel anything, he would discard the program.

Brad, on the other hand, apparently felt differently, writing that it was a “life-changer.”

I-Dosing works, according to James Nestor, author of the book “Get High Now (without drugs),” if you have enough concentration and will. He compares it to meditators sitting for hours counting breaths each day, thinking of nothing.

“This simplest of exercises gets them inextricably high, flooding their bodies with good-feeling hormones and neurotransmitters like dopamine and seratonin,” he says of meditators. “It’s not just a subjective experience either: meditation provokes a physiological change in the brain, greatly exaggerating the parts of the brain that control feelings of happiness and atrophying those that provoke feelings of sadness or anger.”

Humans, he continues, are wired to seek out ways to feel good and experience the world in alternative ways. A baby, for example, he says, wants to be rocked gently in someone’s arms or in a crib, which “doses” the baby into a mellowed, trance-like state and allows him to sleep and relax. As we get older seeking out the same type of experience continues: “As children, we spin ourselves in circles to confuse our perspective, to enter an altered state of consciousness. As adults, we exercise, which releases all sorts of doping hormones into our bloodstreams.”

Referring to the scientific study of binaural beats, Nestor says that after extended periods of listening to binaural beats a physiological change takes place in the brain where the two hemispheres of the brain begin to synchronize.

“Long-time meditators show the same change but after years of practice,” Nestor says. “Binaural beats can promote this change in some people within hours.”

Nestor says the brain is not the only part of the body affected by the beats; they also have an impact on the neurological system of the body as well. As they progress through their menstrual cycle, women hear the binaural beats at different tones. Moreover, people with Parkinson’s disease can’t hear the beats at all. Both of these tidbits prove that they are affecting our brains in some way, Nestor says.

A researcher from the Oregon Health and Science University thinks otherwise, however.

Helane Wahbeh, an assistant Professor at Oregon Health & Science University in the Department of Neurology, whose research focuses on mind-body medicine, has conducted a small controlled study looking at brain wave activity. The binaural beat perceived is the difference between the two externally presented frequencies, she says. For example, if the right ear receives 400 hertz and the left ear receives 410 hertz simultaneously, a beat of 10 hertz is perceived by the listener. The theory behind entrapment of brain waves is that the person is then supposed to have an increase in brain activity by those 10 hertz.

But in her study, Wahbeh says she did not see any corresponding brain waves to match the beat people were listening to. She does note in a paper she wrote for The Journal of Alternative and Complementary Medicine that binaural beat technology may have a positive effect for self-reported psychological measures, especially anxiety.

So it works, depending on how much you believe it will work. Harmless fun, right? Not so, say some. In Oklahoma, three students were sent to the principal’s office when they appeared intoxicated and high in March. The students explained to the principal that they had been I-Dosing, according to local media accounts. Officials at Mustang Public Schools then sent a letter home to parents, alerting them to the site. The Oklahoma Bureau of Narcotics and Dangerous Drugs also got involved, saying kids would visit sites like I-Doser.com to see what the hubbub was about and potentially head to the real thing.

Nestor, for his part, has a tongue-in-cheek approach to any parents worried about their kids safety. He says he has invented a product called the Anti-Doser, made up of earplugs and a blindfold. When the kids arrive home from school, he says, “we suggest parents immediately blindfold them, put the ear plugs in and lie the child in a warm, soft place and feed them liquefied starches. This will inhibit the child from getting inadvertently high of the fluorescent lights in the kitchen, bird chirps in the backyard, allergens from fresh-cut grass, lightheadedness from digesting whole foods, or juvenile illusions posted on YouTube.”